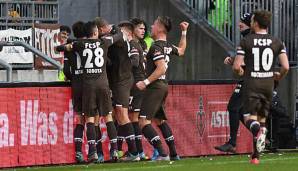 Fall champion Arminia Bielefeld also continued her positive series at the end of the first half of the season. In the top match at home strong 1. FC Heidenheim, East Westphalia reached 0-0 and has been unbeaten in nine rounds. FC St. Pauli and ailing coach Jos Luhukay made a sign of life in the relegation match.

The forerunner had the first chance of the first half (30th) thanks to his top scorer Fabian Klos. In an entertaining game, Jonathan Claus (60th) and again Klos (63th) had the winning goal for Bielefeld in the second half.

Viktor Gyökeres put St. Pauli in the lead with a wounded shot (22nd) – happy at the time, but because of Hamburg's superiority afterwards it was well deserved. A blackout by Marvin Knoll brought Wiesbaden the surprising equalization: Manuel Schäffler used the involuntary effort at 1-1 (70th). Henk Veerman (86th) and again Gyökeres (90th + 1) secured the hosts the first three since the end of September.