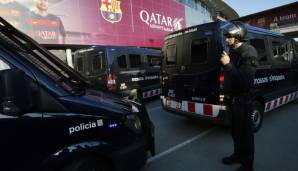 Catalan authorities have further tightened security arrangements in front of the football class between FC Barcelona and Real Madrid (Wednesday 20.00 live on DAZN). Around 3,000 police officers and private security forces are also turned off for the game, authorities say.

"In an exceptional situation, we have to act extraordinary, which is why Democratic tsunami calls for a massive meeting on December 18 at 4 pm," the statement from the activist group said.

Clasico, originally scheduled for October 26, had been subjected to a demonstration in the metropolis condemning Catalan separatist leaders. The democratic tsunami had already paralyzed Barcelona airport in October and a highway in November.

In the league, Clasico was recently a one-sided affair: since 2016, Real Madrid could no longer defeat Barca, four of the last six matches Blaugrana won. In March, Barca won the last away game 1-0.