90 + 5! Real Madrid draw against Valencia before Claisco thanks to Benzema – Transgaming 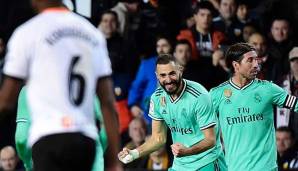 Real Madrid did not convince at the Clasico dress test and thus missed the leap to the top of the table. Three days before the match at FC Barcelona's arch rival (Wednesday, 8 pm live on DAZN), the FC Valencia team came up with only a last-minute goal from Karim Benzema (90 + 5) at the presentation of the real Keeper Thibaut Courtois to a 1-1 (0-0).

Real thus equalized points with leaders Barcelona, ​​but the Catalans stay ahead thanks to the better goal difference. Barca had only played 2-2 at Real Sociedad San Sebastian on Saturday, leaving their own counter-attack. Madrid could not profit from it, but have been without defeat over eleven games.

The team around national team player Toni Kroos, who was used all season, started strong on Sunday, but Valencia soon got the game balanced. Carlos Soler (78th) met at the beginning of the closing phase for the undeserved lead. In the course of time (90 + 4), substitute ex-Frank Luka Jovic did not initially get a hit, when Benzema struck.

Spectacular in the making: Real keeper Courtois moved up the opponent's sixteenth corner in the final corner of the game and forced Valcencia keeper Domenech to set course for a parade. The rebound landed via the Courtois detour at Benzema, which then shot in.