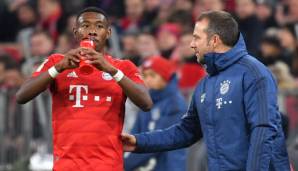 David Alaba has spoken out for further cooperation with coach Hansi Flick over the winter break. In response to a question from SPOX and target after Bayern Munich's 6-1 victory against Werder Bremen, the Austrian replied: "Yes."

It's not just his personal opinion, Alaba added: "We feel very comfortable. You can see his philosophy very well in our game."

Asked about this, Hasan Salihamidzic again avoided making any commitments. "Of course we look very closely at how we work, how the coach works, how the players react to it. But of course we decide," said the sports manager: "Sure, the players may want it, but in the end we have the last word. "

If the last two Bundesliga matches this year at SC Freiburg on Wednesday (20:30 in live-ticker) and against VfL Wolfsburg are successful, further cooperation with Flick for the summer is almost certain. "Just let Hansi work," Salihamidzic said. "After the last game, we will sit down and announce a decision. The statement is clear."

The 54-year-old Flick returned to FC Bayern from Niko Kovac in the summer, which he played professionally for from 1985 to 1990. After divorcing from Kovac in early November, Flick was originally promoted to interim coach, then had the chief Karl-Heinz Rummenigge gave him a job guarantee "until Christmas and possibly beyond" after two successful matches at the ordinary general meeting in mid-November.