Aperribay: “Imanol continuity can be taken for granted” – Transgaming 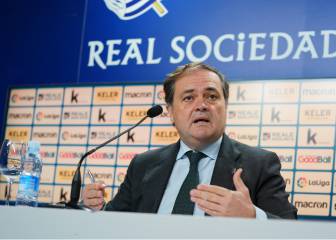 After obtaining majority shareholder support at the General Assembly, Jokin Aperribay, President of Royal, analyze today's most relevant aspects from the txuri-urdin team.

What is left after eleven years as president of the Royal?

It's hard to say you stay in so many years, but having 34,000 members is a milestone and an important detail. You get the experiences we will share at the Reale Arena as we build the future little by little.

In the Council, expressed concern about the movements of the major European clubs, it is necessary to worry so much?

Let's see, I don't share these movements in European football, and we broadcast it on ECA, we are members of the ECA committee and we will actively participate. Football has been organized for a long time and the major leagues have been successful. It seems to me that without knowing where we can go, we discredit what it has cost us a lot to organize. The European leagues project does not know where it leads us, and I do not share it, because I do not know how football will improve. Because joining some clubs doesn't mean football gets better.

How do you explain the deviation in Anoeta's retirement budget from 57 to 78 million?

The budget for the field works has been increasing due to the improvements we had to make: accommodation and improvements in level 3 and changing rooms, which were not in the initial project. These are improvements that needed to be made, as well as work in the press areas.

"One of the thorns I have as president is that when we brought together Griezmann and Illarramendi, there was no money to bring in Xabi Alonso."

Were your partner's forecasts met with the reform?

Yes. That's the best thing about retirement, the growing number of partners, and people's joy at seeing their new home.

Are there any real options Real can buy on stadium property?

No. Another thing is the will of the City Council and the municipal groups. But right now there is no possibility. Now if they ask us, we would try. We do not close.

With the field reform project almost completed, do you see your end as the nearest Real president?

I haven't thought of that yet. It will depend on the shareholders, my colleagues on the board, my wife. I am eleven years old as president and eleven less years as president. But we are very happy and comfortable in the Council.

"Now there is no possibility to buy Anoeta; something else is the will of the city and the municipal groups. If we consider, we will try."

How do you see the future of Real in sport?

We have a young team and a young subsidiary. Now we have to know how to form a team and give talent to our young players. We need to improve results at home and seize the opportunities we have. And I can only ask you to stay the same, with the same self-demand and the same desire.

Have you considered improving Oyarzabal's condition to avoid temptation from other clubs?

Mikel has a 75 million termination clause and does not plan to talk about an improvement. In this and other cases, it has to do with creating microclimates and collecting our best talents. As a Real budget can not compete with a Real Madrid budget, but ten budgets can compete with ten from Madrid. One of the thorns I have as president is that when we brought together Griezmann and Illarramendi, there was no money to bring in Xabi Alonso. Because to be close to winning, in Real, it's about bringing generations together, and I couldn't. That is why I am talking about creating a Real in the long run, because in the short run we will be wrong. We always think about the strength of the real before the short term. I had this conversation with him and he listens to me this reflection.

How is the renewal of Imanol Alguacil?

The continuity of Imanol can be taken for granted. We have to wait, but yes, the contract is written, without extensions and without limit. I see him with a lot of future in Real, and he will choose his participation. Players blindly believe the way they believe. I see him very happy, although we already know how football moves.

"Rubén Pardo is doing very well, nothing strange happens to his situation and is not forgotten by Imanol, who speaks very highly of his work"

Does the club expect much movement in the winter market?

In principle no. But we haven't had any talk about it yet, but we believe it will be a quiet January. Despite making this assessment, we expect Pamplona.

Anything extra happen to Rubén Pardo?

We'll look into your future later, but it's true that we didn't make a renewal offer. He is doing very well, nothing strange happens to his situation and is not forgotten by Imanol, who speaks very highly of his work. It's a decision that will be made in the medium term, and if we believe we should renew it and we're late … well, we're late.

Januzaj asked to leave in January?

No, he didn't tell us anything. But we parked those conversations after Pamplona. First, Barça, let's see if we give our fans joy at home; then the World Cup in Palencia, and to finish the year well against Osasuna.