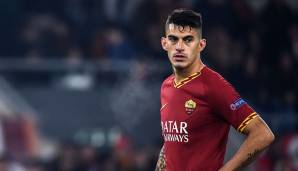 WAC has adopted with a strong performance from the Europa League. After the 1-1 draw in Graz, they managed to survive the second duel with the Italian top club unbeaten with a 2-2 draw at AS Roma. Leaving international business is easier to cope, also because the 4: 0 draw at Mönchengladbach caused an extra sensation.

"We wrote a great story for this club," said WAC interim coach Mohamed Sahli. The draw on Thursday night in Stadio Olimpico with 25,000 spectators was a worthy end. "Getting a point at AS Roma, a top Serie A club, one of the best leagues in the world, is not easy. We did it with great conviction and enjoyed every moment," said the Tunisian-born. There was no time for trouble after the final whistle. "A point against Rome must be celebrated," Sahli says.

Red Bull Salzburg and LASK possible opponents for AS Roma

The end of his team was already decided before the game began, however, for the Romans it was still the final climb. In the event of a defeat, they would have lost because of the poorer direct comparison with Gladbach in the battle for a place in the sixteenth final, where Salzburg and LASK are possible opponents. This means that WAC performance is even higher. In addition, the goals were twice off goals from Diego Perotti (7th / penalty) and Edin Dzeko (19th) with goals from Alessandro Florenzi (10th / own goal) and Shon Weissman (63rd).

"We have studied the last six games of AS Roma very carefully, and the players have implemented the tactics very well," Sahli said. Finally, the point must be classified as happy because of a strong phase on the website, where especially "Joker" Nicolo Zaniolo secured a lot of speed. "We underestimated the WAC, the opponent was stronger than expected," Perotti admitted. So the first stage wasn't warning enough. "We thought it would be easier, but this team also sold well, played very well," praises Roma coach Paulo Fonseca WAC.

AS Roma fans with racist outcry against Anderson Niangbo

With his team only fifth in Serie A after 15 rounds, he was anything but happy. "We did not fight a good fight and made too many mistakes, it was dangerous for us," the Portuguese analyzed. The Italian press was therefore understandably not satisfied. "AS Roma is making progress in the Europa League, but in the worst possible way. Two games and two draws against Wolfsberg: It says a lot about the condition of the Romans," wrote the daily Corriere della Sera.

Negative brand followers of "Giallorossi". From the "Curva sud" twice racial shout-out to WAC head Anderson Niangbo was heard. An event that unfortunately is not an isolated event in Italian stadiums.