B juniors interrupt the game after racism – Transgaming 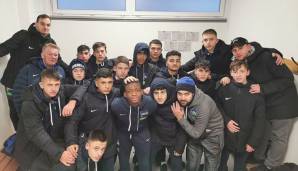 Hertha BSC's B juniors canceled a match in the U16 regional league against VfB Auerbach because of a racism episode.

As the capital club announced on Saturday night, players left the 2: 0 pitch for the Berliners after being furiously offended by the opponents.

Referee Martin Wadewitz then stopped the game in front of 25 spectators. U16 coach Sofian Chahed (36) and several players had previously complained to the referee without success.

According to information from the referee, we decided to leave the field in the 68th minute when the score was 2-0 and not to continue because in Hertha BSC we condemn racism and discrimination in all forms, "the statement said.

Hertha BSC: Other racism within a week

Hertha's young coach Chahed posted a photo of her team on Twitter, writing: "There must be no room for racism on and off the field." VfB Auerbach first did not comment on Saturday night.

Last week, after a regional series match between the second team and 1. FC Lok Leipzig, Hertha's U23 player Jessic Ngankam reported that he had been offended by a Leipzig fan curve monkey and by the word "monkey". The game had been interrupted for several minutes.