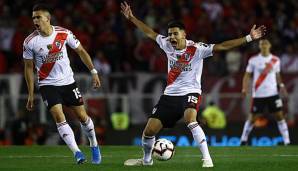 Bayer Leverkusen has found a possible successor to the highly targeted Kai Havertz. As Werkself announced on Monday, Argentine international Exequiel Palacios will move from River Plate Buenos Aires to Leverkusen in January and sign a contract until 2025.

According to the trade magazine kicker The transfer fee for the 21-year-old midfielder should be around 22 million euros.

"Exequiel Palacios is a technically strong midfielder with a move on goal and the ability to use teammates. He fits our team and our style very well," said sports manager Rudi Völler. Sports Manager Simon Rolfes added: "In addition to his football quality, he also stands out with a remarkable mentality."

Palacios, who has also been associated with Real Madrid, played 80 competing matches for the top club River Plate, with which he had won the Copa Libertadores last year. He has played four times for the Argentine national team.

At Bayer, Palacios could replace the German international Havertz, who is being followed by Bayern Munich, FC Barcelona, ​​Real Madrid and several top English clubs, among others. But he will also be a possible successor to Charles Aranguiz, whose contract expires in the summer.