Diego Martínez: "We are conditioned by the casualties" – Transgaming 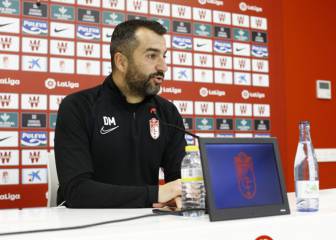 Diego Martínez spoke before Levante's visit to Los Cármenes, where the Nasrids want to continue adding after breaking their losing streak against Alavés. For the Galician coach, he is a very complicated and straightforward rival for salvation: "We have a tough opponent, with important offensive power. Levante has the ability to associate or be deep. We know that with the ball they have many alternations" . Obviously, the absences in both teams will be the main protagonists of the game. "Three games in a week and at a time when we are very conditioned by the losses, but we have to get over it with the illusion of getting 27 points."

The Galician coach appealed to Los Cármenes fans to help them in a very important game: "We have to see a stadium where the team and the fans have tremendous strength. Grenadinism should be at its best." "The schedule is very demanding and very often. We have to focus on the opportunity we have," said the coach. For Diego Martínez, the key is to make his game: "We have to get the game to our interest. We have a tough opponent with important offensive power."

Diego Martínez revealed that Granada is investigating the winter market, mainly because of the team's significant and long-term casualties. "Replacing Quini or Fede Vico is very difficult, even in the summer market, because of baggage, adaptation or because of your football profile. We will try to improve the team, but it will not be easy." Nasrid's coach is clear that he would rather have his own: "It would have changed that those who would not be healthy would be healthy, that would be our best winter market. We will have to incorporate players out of necessity." "There are several numerical needs in the model," he said.