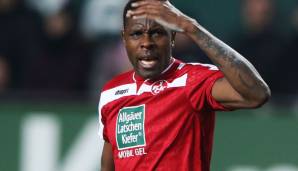 "Mo Idrissou is in the Vordernberg detention center. Apparently, there was something wrong with his papers," said Edi Lieber, chairman of Idrissou's current employer DSV Leoben, Kleine Zeitung.

The Austrian Federal Interior Ministry did not directly confirm the personnel, but spoke to the Kronenzeitung about a "person with a footballing past" in the Vordernberg detention center.

"You need a statement about no objections to the visa. Apparently, he didn't have it together," Lieber said. On the club side, they did everything necessary: ​​"I had a work permit there. But the visa is up to the player. And apparently there were problems. It must have something to do with his past."

The 39-time Cameroonian international Idrissou was active in the Bundesliga between 2002 and 2011 in a total of 139 games (27 goals) for Hannover 96, MSV Duisburg, SC Freiburg and Borussia Mönchengladbach. His last stop in Germany in 2015/16 was the KFC Uerdingen. This summer, Idrissou started with Austrian Fourth Division club Leoben, scoring two goals in eleven games.