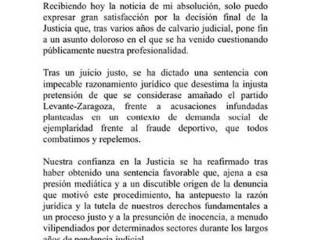 Gabi He expressed his satisfaction after learning on Monday of the sentence for the alleged size of the Levant-Zaragoza disputed in May of the 2010/11 season. The player of Al sadd and ex from Zaragoza and Atletico Madrid He particularly wanted to thank the rojiblanco club for the support it received. Along with Gabi, another 35 players were acquitted and the former president of Zaragoza was sentenced to one year and three months. Agapito Iglesias and the former Aragonese club manager Javier Porquera.

Gabi's statement is as follows:

"Receiving the news of my acquittal today, I can only express great satisfaction at the final decision of the court which, after several years of judicial ordeal, puts an end to a painful matter in which our professionalism has been publicly questioned."

Following a fair trial, a sentence was issued with impeccable legal reasoning that rejects the unfair allegation that the Levant-Zaragoza party is found to be defrauded, against unfounded accusations raised in the context of exemplary social demand against sports fraud, that we all fight and we repel.

Our confidence in justice was reaffirmed after we obtained a favorable ruling that, unaware of the media pressure and the debatable origin of the complaint that motivated this proceeding, placed legal reason and the protection of our fundamental rights in a fair trial and the presumption. of innocence, often maligned by certain sectors during the long years of judicial penance.

That is why I must publicly express my gratitude to all those who have kept their trust in me, and particularly to the Athletic Club of Madrid, which has always supported me at this crossroads. And to share with all my colleagues patiently submitted to this process, the happy result.

After that, we hope to regain the serenity needed to continue contributing professionally to the sporting world. "