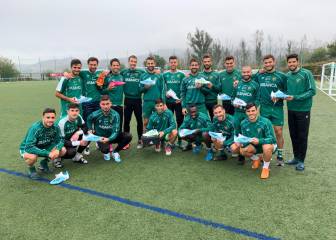 Coruxo is another representative of the Federation Cup. Like Castellón, however, he will not be at La Nueva Condomina to enjoy the grand final which awards, among other things, over 90,000 euros in cash. Tudelano was his executioner in a tie that was settled with a goal of zero. Before, they entered the semifinals or, what is the same, got the ticket for the Copa del Rey by winning in the penalty shootout in Salamanca. So Pablo Brea, goalkeeper of only 18 years and ceded by the Deportivo de la Coruña, interrupted three maximum penalties. We already have the first certainty: Mirandés will have difficulty scoring.

The second is that the Galician team occupies the bottom of Group I of Second BBut not for this reason is exempt from giving the surprise. Less with the stadium factor in your favor. Campo do Vao, with capacity for 1,500 spectators and a magical and unique atmosphere throughout the national scene. The third evidence is in the images. Since now, the climate created around Coruxo's fiefdom is prone to historical events like the first round of the Copa del Rey. If players reach the passion, they can celebrate it on the beach, a few meters from the entrance. AS thanks Míchel Alonso, coach, for insisting that readers bathe on the shores of Vigo in the form of photography. This also responded to the newspaper test, alluding to the new KO tournament format.

Campo do Vao, a few meters from the beach.
Coruxo

Míchel Alonso, in the AS test:

1. The new Copa del Rey is …
Beneficial to all. It's something that should have been done a long time ago. Both the king's shape and the RFEF Cup look good and beneficial to everyone, especially to modest clubs.

2. Who do you dream of facing in this new format?
By proximity, the club's illusion could be to play against Celta. From there, anyone who might come … Now we have a tricky game against a very difficult Second Division rival. If we could pass, any First team would be well received, but being Vigo, we would like Celta.

3. Which Spanish soccer player have you signed up for on your team?
It's utopian (laughs). If we could, Messi, who is the most prominent and everyone would choose. If I were Spanish, for being here and for everything that was demonstrated nationally, I would stay with Iago Aspas.

4. Choose: Reach the Copa del Rey semifinals or climb this season.
Both are very complicated, but I got the promotion.

5. Define your club in three words.
Humility, commitment and work.

6. Define the place your club represents in three words.
It is an idyllic place, our course is next to the beach, at sea level. The area is idyllic, about anything. You cross and there is the beach.

7. What does your team play?
We are trying to adapt to various things. The basis is touch, touch well. But we try to be chameleonic and adapt, because category is what it demands.

8. What is your best memory of Copa del Rey?
The centenary of the Deportivo de A Coruña.

9. Eliminating the rival would be a feat, which is the biggest thing he remembers in football?
I'll say one of mine. When I went up with the Somozas, a city of 800 inhabitants, to Second Division B.

10. The new Copa del Rey invites you to dream, do you dare to challenge if you win the trophy?
The first thing that comes to mind is retiring, but I don't think I did that because I would have a job. I would commit to continuing in Coruxo for another year and I'm sure I would have offers to do that, more than I have now (laughs).