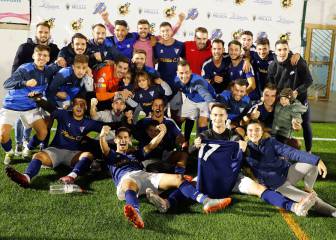 CD Melilla was Best of Autonomous City of Preferred last season. Therefore, and after being able to topple Lobón in the extension of the preliminary round, he booked a site with the best. He will face the Lift For a dream and you will have the whole region by your side. At least that asked Eloy Marteache, one of his captains: "We tell the people of Melilla to come all because this is going to be a very good thing for the city"Who will not see it on TV, because it will be one of 16 meetings broadcast.

Municipal Álvarez Claro (his usual stadium is La Espiguera), however, he already looks like his rival. Levante visited Melilla in season 2012/13 and has no good memories. He was defeated by a 0-0 goal, although in the second leg he solved it with a strong 4-1. Of course, at that time CD Melilla was still in diapers and the First Division candidate was Melilla UD. In the meteoric progression, the club has gone through the First Autonomous and now lives suffering the adventure of the Third. Philip Heredia, second coach and one of the quarry managers, assists AS with the illusion that the modest has a historic opportunity and passes the World Cup test.

Felipe Heredia, in the AS test:

1. The new Copa del Rey is …
Very good. It is a format to reward all regional teams. It is beautiful and we are very happy that a First Club can come to our city, whatever it is.

2. Who do you dream of facing in this new format?
If we go rounds, I would like Barcelona. Me, but some of Madrid's clothes, even Betis, Sevilla … I keep Barca.

3. Which Spanish soccer player have you signed up for on your team?
For Messi It is the best.

4. Choose: Reach the Copa del Rey semifinals or climb this season.
The climb.

6. Define the place your club represents in three words.
It's a beautiful city. I don't know how to explain it, but Melilla cheats a lot, you need to know her. Everyone who comes here falls in love.

7. What does your team play?
According to the circumstances. Now we play with touch, but sometimes for the opponent we need to play against, running … It depends a lot on the rival.

8. What is your best memory of Copa del Rey?
The grand final between Barcelona and Valencia last year. It was a very close match, very beautiful.

9. Eliminating the rival would be a feat, which is the biggest thing he remembers in football?
I have so many … I'd keep the second pass if we can. It would be amazing to Melilla. Being from the Third Division, eliminate the Levant …

10. The new Copa del Rey invites you to dream, do you dare to challenge if you win the trophy?
Just hearing you laugh and thrill makes me speechless. It would be historic, I would be willing to do anything. Just like me, we would be capable of everything.