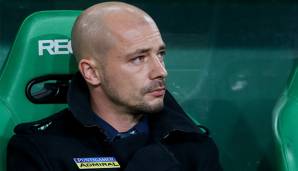 In the last game of 2019, SK Sturm Graz meets LASK (at 17, in LIVETICKER). The two clubs appear to be in different spheres, so their starting position in the summer was actually quite similar. Storm coach Nestor El Maestro draws a first conclusion about his time.

While LASK is swimming on the wave of "Europhorie" and only three points in the Bundesliga are against the leaders Salzburg, the situation at SK Sturm Graz is slightly different. In the Europa League qualification you were eliminated early in the second round against Haugesund. In addition, you are in the upper midfield of the table, but may be longer if you think about the lost points from some controversial judging decisions.

In an interview with Steirerkrone Coach Nestor El Maestro is still struggling with some results: "What hurts is our missed opportunities. It would have been more in a lot of matches."

However, the 36-year-old finds comfort and inspiration from the glorious period of the deceased two thousand: "On the one hand, after seeing the images from Storm's successful past at events, I have tears in my eyes myself. With pictures when Foda lifts the bowl or they carry Osim off the lawn on their shoulders. It motivates. "

However, he does not even assume that he will be "led by the shoulder seat." Because he "understands the frustration" of the fans, especially after the early European Cup. But the community in the club also makes him optimistic: "The feeling after the final 1-0 in Wolfsberg after leaving the European Cup was great. At that time I was new to the club and you could see a lot of the unity that I want."

In addition, Sports Manager Günter Kreissl screwed on a few screws in the squad, which on the one hand increases the density. "Field", the team is therefore "significantly more interesting than last season." At the same time, the transfers also caused criticism that too few directors would show up for "Blackies". El Maestro can't make much of it: "I have little understanding of it in modern times. I've heard the rigorous argument many times. But I've been asked more often if we can't hold Despodov."