No doubt about the identity of Silas Wamangituka – Transgaming 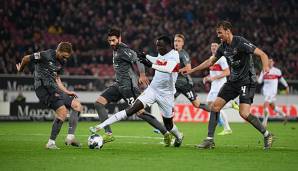 Second Division VfB Stuttgart has decisively rejected media reports about the allegedly false identity of its Congolese professional Silas Wamangituka. "There is no reason to doubt the accuracy of the documents," coach Tim Walter said Friday.

The French daily sports newspaper L & # 39; Equipe had reported that Wamangituka (20) could be Silas Mvumpa Katompa (21). This is claimed by Max Mokey Nza-Ngi, president of the Congolese club MK Etancheite, with whom Mvumpa Katompa had a contract. From there he is said to have switched to Paris FC and eventually to VfB. The Bundesliga relegation team got attacker Wamangituka from Paris for eight million euros in August.

"For us, there is no doubt," Walter emphasized, "so I try to support him with everything I have." He no longer wanted to address the problem internally and treat the tip "as we have done so far. I am always there for the boy, so nothing changes." Wamangituka, who has scored four goals in twelve series matches, is also Monday (at 20:30 in LIVETICKER) in Darmstadt "a candidate for the eleven starters," Walter said.

VfB endeavored to keep the story small and not let another "Jatta case" arise. "Silas is a very reserved young man, quite shy in the cabin," said Walter. For him personally, it's about football, "purely about the game on Monday. For us, it's important that Silas is the player we want."