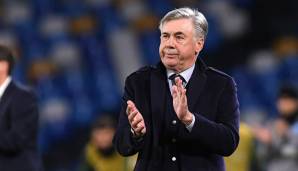 Star coach Carlo Ancelotti does not appear to be back on the bench less than a week after being knocked out by Italian running SSC Napoli in the English Premier League club FC Everton.

According to reports from several British media, the former coach of the German champions Bayern Munich is said to have reached a general agreement with the relegation-threatened "Toffees" on a commitment followed by the Portuguese Marco Silva, released at the beginning of the month.

As a result, Ancelotti could be introduced as a new team leader at the local rival of Champions League winner Liverpool FC before the League Cup quarter-final against the current Premier League second Leicester City. This would be the second time the 60-year-old would have stood for an English team after Ancelotti had stood for Chelsea FC from 2009 to 2011 in London and led the Blues to a double in their first year.

Everton is in acute danger of relegation after a messy first half of the season. Under Scottish interim coach Duncan Ferguson, the former European Cup winner left the danger zone after the first two matches since the separation from Silva, at least for the time being. According to the club, Ferguson will sit on Everton's bench regardless of the further course of talks with Ancelotti against Leicester.

For Ancelotti, getting into Everton would mean a faster comeback than expected. Last week, the former pro officially had to leave the position in Naples just hours after advancing to Round 16 of the Champions League due to continued lack of Serie A success.