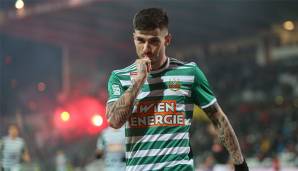 Rapid has moved up to third place in at least one day in the Bundesliga. Hütteldorfer celebrated 3-0 victory over Admira in the 18th round on Saturday, two points ahead of the WAC, which will compete with Wiener Austria on Sunday.

The goals of Thomas Murg (2nd place) and Taxiarchis Fountas (7th, 57th) gave the Green Whites a successful finish to the year and their seventh victory in the ninth league match this season. The Admirals, on the other hand, were the losers after two draws and one win. Against Rapid, it was the seventh bankruptcy with a private bath.

The accident started early for the tenth. Murg dipped Markus Lackner and sank the ball with a low shot in the far corner (2nd). Five minutes later, Fountas reached the ball in the penalty area and scored safely. Christoph Knasmüllner was the assistant on both occasions.

After the optimal start, Rapid continued to dominate the action and could have taken a higher lead before the break. However, Knasmüllner failed because of Andreas Leitner (26), when the Admira keeper was on hand with a chance from Fountas (30). A shot from long range by Murg just missed the goal (35th), Knasmüllner shot well over the goal from a good position (39th).

The youngest Bundesliga player in the history of SK Rapid

Little changed in the characteristics of the game in the second half. Rapid dominated the substitute-weakened Südstadt, but did not play as many convincing chances as before the side change. Still, the visitors still managed the third goal: After optimal presentation from Murg, Fountas scored his second goal in this game (57th). The Greek, who had been absent on the derby due to father's delight, now has eleven championship goals this season.

As a result, Rapid played the leader-dry home, one of the few highlights of the second half included two substitutions in strong wind and rain. Japanese Koya Kitagawa made a comeback for Rapid after nearly three months of injury.

In addition, Yusuf Demir was swapped and at the age of 16, six months and twelve days became the youngest player ever to compete for the professional Rapid. ÖFB junior team player replaced the previous record holder Veli Kavlak.