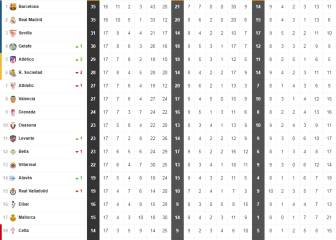 Barcelona and Real Madrid continue to lead the Primera Division standings. In the fictional league of what it would be like without the influence of VAR, they would be the targets with 39 points first. On day 17, this tool intervened four times, twice to change the game signal. In San Mamés, a goal was annulled by Correa for a previous offside and in Balaidos was scored a penalty in Budimir, which helped Mallorca score a point. In Mestalla, there was a misidentification. In Espanyo-Betis, the referee went to the monitor to review Espinosa's goal, but he upheld his decision.

Alberola Rojas went to the monitor to review Braithwaite's goal, which was eventually canceled because Rosales had a hand. Without the VAR, the Leganes would have added a point.

Gerard Moreno's goal was canceled offside, but at VAR they said it was legal and went up.

The striker annulled Loren's goal offside, but the VAR decided he was online.

Celta's only goal was disallowed for offside, but VAR conceded Aspas's goal as they considered there was no anti-regulatory position.

The VAR awarded Atletico a penalty for a Cheryshev hand within the area. Diego Costa turned the maximum penalty and gave a point to the rojiblanco team.

Madrid left its locker in wax after the VAR annulled a goal for Hazard for being in an illegal position.

By the VAR, they warn that the penalty that Masip had stopped from Banega should be repeated because the goalkeeper was ahead at the time of launch. The Argentinian scored the second.

Rober Correa's goal is canceled by a previous offside by Ander Capa.

The referee went to the monitor to clear Aidoo penalty for Budimir. Saves Sevilla turned the penalty.