This is Villaviciosa's loyalty: "Work, effort and humility" – Transgaming 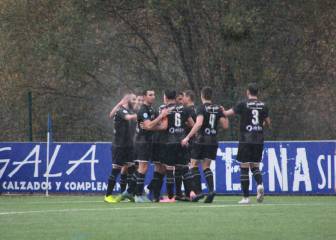 103 years of history, but with the same humility of the first day. On June 1, 2019, the loyalty of Villaviciosa is required. spend the night in Madrid to face the Getafe subsidiary at the club's sports facilities. There was a big problem: that day, the Wanda Metropolitan Champions final between Liverpool and Tottenham was played and booking a room in the capital was not available to anyone. Moreover, from Villaviciosa (Asturian city of about 15,000 inhabitants), it was impossible to travel during the day. Given the club's economic conditions, a desperate solution had to be found.

Finally They found accommodation in a student residence between parties, final exams and college environment. They did not achieve the success of the climb, nor at the second opportunity against Villarrobledo. Now football gives them a second chance at the Copa del Rey and before the big revelation so far this season: Cadiz. It is not a First Division, but as it were. too The time is typical of LaLiga Santander, week by week. On Tuesday 17th, from 15:30, Les Caleyes will host the match. Soon, due to the lack of illumination of a stadium embedded between meadows and with a wide angle full of beauty. Pedro Menendez, its president, participates in AS to answer questions from the Copa del Rey.

OrkWork in silence
CadaFight each ball as if it were the last
🏆 Defeat with humility
☹️Extend to fold when not in
PetCompetite Until The Last Second
🍀 Above all, get lucky in exchange for sacrifices

Pedro Menéndez, in the AS test:

2. Who do you dream of facing in this new format?
In the first round, not among the biggest … Of the draw, I would like Athletic Bilbao. I love everything around you, facing them would be marked in club history.

3. Which Spanish soccer player have you signed up for on your team?
No doubt I am very Messi.

5. Define your club in three words.
Work, effort and humility.

6. Define the place your club represents in three words.
(It takes time) Beach, cider and … football.

7. What does your team play?
We don't have a fixed scheme, but we always try to play as much as possible on the rival field.

8. What is your best memory of Copa del Rey?
As a player I was lucky to play a draw against Sporting's double game. In Les Caleyes, in our field, we won 1-0 and in El Molinón, we lost 3-1. But we were very close to 3-2, which would give us the pass. I will remember all my life. Marcellin Garcia Toral trained us.

9. Eliminating the rival would be a feat, which is the biggest thing he remembers in football?
The two rises that loyalty has had. One as a player and one as president. They are the ones who lived inside.

10. The new Copa del Rey invites you to dream, do you dare to challenge if you win the trophy?
I see it almost impossible, not even in dreams. But probably. I would like to invite everyone to the final and then we would have a party … the Loyalty Party (laughs).